Indigenous Ayoreo protesting against inaction of the Government on illegal deforestation. © GAT

Paraguay is currently the location of a far from ordinary regional meeting. Experts from Bolivia, Brazil, Ecuador, Colombia and Peru gathered on July 28 to discuss the critical situation posed by increasingly frequent sightings of indigenous peoples in isolation and its consequences.

The irony is that this meeting called by several organizations for cooperation and indigenous rights was held in a country that fails to apply, when it’s not flagrantly disrespecting, International Law (1) and the Guidelines for the Protection of Indigenous Peoples in Isolation and Initial Contact (2), both of which it is committed to comply through consultation with the United Nations Human Rights High Commissioner.

All of this despite the fact that the Paraguayan Chaco is home to the last uncontacted Indigenous people outside the Amazon, the Ayoreo-Totobiegosodes (3), a nomadic hunter-gatherer people who consider this area their ancestral land and who have taken care of her for countless generations.

Against the current, destruction continues at the hands of landowners and firms, mostly of foreign capital, which illegally log territory to make way for cattle farms. The state is a spectator, often indifferent if not complicit (4) in this devastation, although theoretically it should be safeguarding the lives and lands of those who are fleeing from bulldozers and sheltering in the last refuge of the forest inhabited by both them and their ancestors.

Deforestation and disease: a deadly duo

Neither the fleeing situation which has forced uncontacted indigenous people to have interactions with outsiders, nor the dangers that they and everyone involved face, can be headed off unless the state responsible for their welfare moves from rhetoric to action. It is a fact that if their land is not immediately protected, the Ayoreo-Totobiegosodes, whose name means "people of the wild pig place" who still survive thanks to isolation, are facing a catastrophe.

This is one of the most vulnerable societies worldwide (5), which is perhaps why in the UN guidelines, such as in the Convention 169 and the commentary of the Special Rapporteur on the Rights of Indigenous Peoples (6), the principle of the intangibility of their territory, and the criteria of use in place of ownership to establish their limits, are not understood as a fanciful whim, but as the key to their survival.

Many of the contacted relatives of the Ayoreo, living in sedentary communities, have been claiming in collaboration with Survival International for more than 20 years the ownership of their land, 500,000 hectares which belong to them and to their isolated family members threatened by agricultural and farming industry. They are the rightful owners, but the land remains under the control of foreign companies.

The lookout for expansion of these firms, such as Itapotí S.A., Yaguareté Porã or the subsidiary of Grupo San José, with Carlos Casado SA at the head, has led to the fastest rate of deforestation in the world, according to a study from the University of Maryland (7). The death of the forest is followed by the violation of the most fundamental right of all: the life of the Ayoreos who depend on it.

"After we were contacted in 1986 many of our people died, including my mother. We do not want that to happen again," declared an Ayoreo woman before a minister in 2014. An unknown number of recently contacted indigenous Ayoreos are suffering from respiratory diseases to which they lack immunity, such as tuberculosis, because of the activity of those who snatch their land and resources and also as a result of a first contact. Many suffer from this and other diseases brought in by company workers or other people from surrounding areas, which threaten the survival of more lives.

Parojnai Picanerai, Ibore Picanerai, and many more names (8) bear testimony to the trail of death left by forced contact, deaths which would have been avoided if recognition of their land was guaranteed.

The ravages of the "beast with metal skin"

Before contact, Esoi, one of the indigenous people in isolation, saw how the gardens and hunting areas of all his community, which allowed them to survive, were being surrounded. They were forced to leave their forest in 2004. He resisted, like many other Ayoreos still do, the attempt of colonization from an excavator and attacked what he considered to be a "beast with metal skin". "I thought I heard shootings (...) I looked around but we were all alive. Then I realized it was the noise of the trees being cut by the bulldozer," he testified. The threat that Esoi anticipated proved to be real and is still very much alive.

Several companies have been discovered in flagrante (9) through satellite images while building roads and infrastructure within the territorial area claimed by the Ayoreos. Although this has been denounced countless times and in various ways, such as through the recent alarm voice given to the UN (10), the weak and corrupt Paraguayan judicial system has failed to prevent future land invasions or to return the land to its indigenous owners, despite this obligation being enshrined in the Constitution.

The company Itapotí S.A. has illegally and repeatedly invaded Ayoreo land (11). In April 2015, a Government team confirmed that the company operated once more in territory whose title was given to the Ayoreo in 1997 and 2004. Nonetheless, no charges have been brought against the company, owned by Nelly Estela Martinez and Mercedes Viviana Gonzalez, which continues operating with impunity in 15,000 hectares of Ayoreo territory.

Yaguareté Pora SA, owned by Marcelo Bastos Ferraz, occupies 78,549 hectares of Ayoreo land, of which thousands have been illegally cleared by the company’s workers. The Brazilian rancher rejected just over a year ago the desperate request of the Ayoreo to curb large-scale destruction of their forest (12), considered a natural heritage area by UNESCO. Satellite images taken on June 27 this year attest how, despite not having the required environmental license, rapid deforestation to make way for cattle ranching continues. For years there have been advocacy campaigns so that Ferraz returns the land to the Ayoreo, but he still resists doing so. 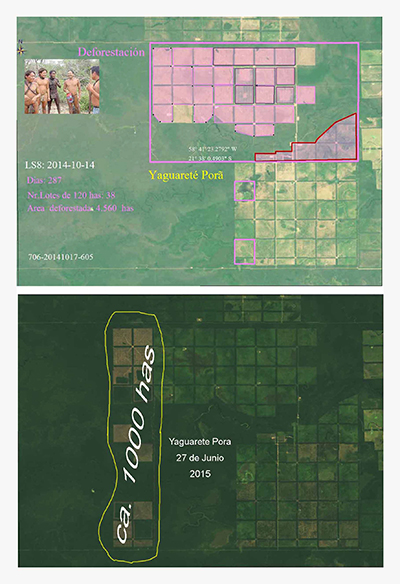 Last satellite images from illegal deforestation carried out by Yaguareté Porã
in ancestral land of the Ayoreo. Dated June 27, 2015. © GAT

The farming and ranching company Carlos Casado SA (13), subsidiary of the Spanish San José Group presided by Jacinto Rey González, owns 36,000 hectares of the core of the Ayoreo ancestral territory. In August 2012, the Government confirmed to the organization of the Ayoreo people, OPIT, that the company began the construction of a road and a reservation without the required legal license. Due to the reaction, Carlos Casado S.A. wrote to the Government to propose the sale of land and subsequent tenure for the benefit of the Ayoreo. But despite pressure from the Ayoreo themselves (14) to demand the return of the Ayoreo territory, the company remains silent and inactive.

The disaster that this dispossession represents for the sedentary Ayoreos is evident not only in the violation of their territorial rights, equivalent to the hijacking of their self-sufficiency and livelihoods. It is also evident in the attempts to rob their dignity, since those who have lost their land often have no other choice but to become pawns of these ranchers who have occupied their territory to breed cattle. "We want to continue using the forest, and we want farmers to stop harassing our relatives who are still there," an Ayoreo spokesperson said in response to this situation.

The best guardians of the natural world

For decades we have witnessed that in contrast to the destruction of the Paraguayan Chaco ecosystem by these companies, the Ayoreos act as the best guardians of the environment with which they coexist. A proof of this is that the lands inhabited by the Ayoreos are still some of the last remaining forested areas in the region

Support for the Ayoreo’s struggle for territory and life has made progress, as can be seen with the recent protection of 150,000 hectares of land that they have been striving to preserve based on their ancestral knowledge and their intimate relationship with her. However, many challenges remain ahead, which can only be solved if organized pressure at the international level is put on the Paraguayan state to fulfill its responsibilities and to awaken broader society to the importance of recognizing and protecting Ayoreo land. This, in turn, will play a role in the protection of our collective future as human beings.

* For more information on the indigenous people in isolation, see WRM’s 194 Bulletin