The UN and conservation industry discourse and propaganda over REDD+ changed to a new forest conservation fad at the UN climate negotiations in December: Nature-Based-Solutions. Another false solution that distracts from the urgent task to keep fossil fuels in the ground.

The UN and conservation industry discourse and propaganda over REDD+ changed to a new forest conservation fad at the UN climate negotiations in December: Nature-Based-Solutions. Another false solution that distracts from the urgent task to keep fossil fuels in the ground.

Fads are ideas or things that are embraced enthusiastically and then dropped when the next fashionable thing comes along. We are familiar with the idea of fads in fashion, for example. International forest policy has produced its own collection of forest conservation fads over the past decades: Payment for Environmental Services (PES), Ecotourism, Integrated Conservation and Development Projects – and more recently, RED, REDD, REDD+ and jurisdictional landscape REDD.

The 25th UN climate conference in December 2019 in Madrid, Spain, will be remembered as the moment where the UN and conservation industry discourse and propaganda over REDD+ were replaced by the new forest conservation fad: Nature-Based-Solutions. “We want to rapidly scale up private sector finance and leverage the potential of nature to help achieve the Paris Agreement goals,” explained the CEO of the international emissions trading association (IETA), a corporate-led group that aims to establish global carbon markets and which is now excited to embrace the new term, Natural Climate Solutions. (1)

Nature-Based Solutions (some use the term Natural-Climate-Solutions) are a dangerous distraction from preventing disastrous climate change. One reason for this is that like REDD, Nature-Based-Solutions are promoted as a compensation tool: this means that companies are going to call themselves carbon-neutral even though they keep burning petroleum and coal. All that is required is some investment into reforestation (tree planting), forest restoration or a new Protected Area. The trees, the argument goes, will soak up excess carbon from the atmosphere. Oil and coal companies will keep pocketing their profits and emissions from burning petroleum and coal will keep piling up in the atmosphere because the carbon in the trees will eventually also end up in the atmosphere, along with the carbon from the petroleum or coal. This is what makes Nature-Based-Solutions so attractive to the fossil fuel industry.

Among the many spaces promoting Nature-Based-Distractions at the UN climate meeting, one stood out. On 5 December 2019, the International Emissions Trading Association (IETA) launched its initiative called Markets for Natural Climate Solutions. (2) The founding members include the oil and gas companies Shell, Chevron, BP, and Woodside Energy and the mining company BHP-Billiton. They are joined by a US-based tree planting organisation, the Arbor Day Foundation, while the initiative's advisory panel includes the US-based conservationist groups The Nature Conservancy, Conservation International, Environmental Defense Fund and Earth Innovation Institute. (3)

Revealingly, none of the company quotes included in the IETA press release mentions the need to stop burning petroleum and coal. Instead, the quotes from the petroleum companies underline their industry sector's expectation for the UN climate negotiations to adopt the rules for a global carbon market. Shell's climate change adviser, David Hone, says that “Natural climate solutions […] offer significant opportunity for carbon dioxide removal. For this to happen, the world needs a widely recognised robust market to channel capital to nature-based projects, while ensuring the highest standards of carbon accounting.” Chevron's Arthur Lee wants "a well-designed market in which carbon offsets resulting from natural climate solutions could be traded.” What is needed, however, to avoid climate chaos, is an acknowledgement that these main corporate drivers of pollution are profit-driven and promote false solutions as distraction from the urgent task to keep petroleum and coal in the ground. (1)

A second meeting, this one organized by conservationist NGOs The Nature Conservancy and Conservation International, revealed another way in which the conservation industry is paving the way for continued fossil fuel burning. At the meeting, speakers from both organisations suggested that countries in the global South where forest loss is high could easily fix that problem with compensation mechanisms. (7) By doing so, they argued, countries would not only be compensating for all the carbon dioxide emissions in their country, but could also build up carbon “storage” that could be sold to others (something called in the climate jargon as "negative emissions").

Peter Ellis from The Nature Conservancy suggested in relation to the voluntary commitments countries have made under the UN Paris Agreement, which are called Nationally Determined Contributions (NDC), that "over half of the tropical forest countries could deliver half of their [NDCs] (4) with Nature-Climate-Solutions. […] Some can achieve 50 per cent of their [NDCs] only with improving Reduced-Impact-Logging for climate," he continued, claiming that this was "achievable without undercutting timber production." (6) What is perhaps most remarkable in these claims is the acknowledgement, contrary to logging and previous conservation industry claims, that "Reduced-Impact-Logging" has a negative impact. 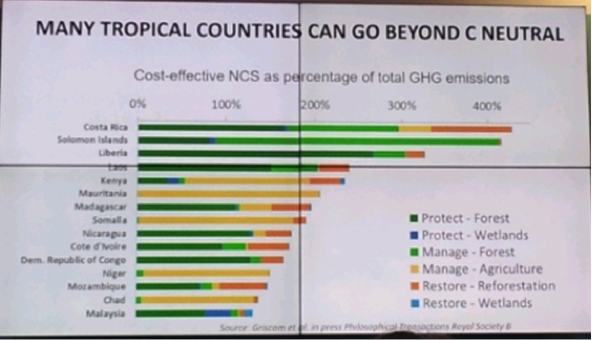 Image shown at side event "Climate Action in the Tropics: Evidence and Policy for Scaling Up Natural Climate Solutions"

Another shift was perceptible at the last UN climate conference in Madrid. The rhetoric on REDD+ at least included a recognition that deforestation is releasing greenhouse gas emissions and needs to be halted. Under Nature-Based-Solutions, however, the focus is shifting towards the need for Restoration. Global food and agriculture commodities companies that made pledges for Zero-Deforestation supply chains, which they know they cannot keep, (8) will be rejoicing: Deforestation seem to have successfully been pushed off the agenda. And the replacement, Restoration, is full of opportunities for the corporate sector (see the “Collection of Concepts that Kill Forests” in this bulletin). The threat that remains in the discourse about Nature-Based-Solutions and Restoration is that as with REDD+, the blame for all that "degraded forest" in need of Restoration is put not with the corporations responsible for large-scale deforestation and forest degradation, but with peasant farming. The search for “available” land for these Restoration initiatives will put more community land and land used for peasant agriculture at the risk of outside control, with the argument that these initiatives are needed "for the climate". Restoration initiatives promoted ever more loudly as Nature-Based-Solutions at the UN climate meeting thus risk expanding a land grab from the forest onto a much wider area of land under peasant agriculture.

IETA's CEO wants to make Natural Climate Solutions “an investable asset class,” – a new possibility for capital investors to make money. That is why IETA launched their "Markets for Natural Climate Solutions" together with the oil companies, and why IETA was lobbying climate negotiators to finish the rules for carbon markets under the Paris Agreement. Perhaps it was good that UN climate negotiators were unable to agree on the rules for the carbon trading Article (Article 6.4) of the Paris Agreement. (5) It might mean less private sector money looking for a lucrative investment that will threaten peasant farming. Besides, if preventing climate chaos is the goal, carbon trading must be abandoned, not expanded. It would be a good start if UN climate negotiators would take the main goal seriously and just focused their minds on action to keep petroleum, gas and coal in the ground.